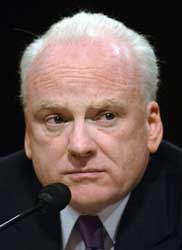 In a never-before-seen interview, Richard Clarke, former White House Counterterror “Tsar” to Presidents Clinton and Bush, goes on record about what he believes happened at CIA in the run-up to the 9/11 attacks, accusing then-CIA Director George Tenet and two of his deputies of deliberately not informing the White House, FBI, and Defense Department about two future hijackers inside U.S., then covering up from the 9/11 investigations.  His comments air and stream Thursday, August 11, 2010 at 7 p.m. MDT on Colorado Public Television (CPT12)  and simultaneously go live on SecrecyKills.com, along with CIA reaction.

News of the premiere set off attacks on Clarke from three of those he singled out.  Tenet and former CIA officials Cofer Black and Richard Blee, chiefs of CounterTerrorist Center and Bin Laden Station respectively on 9/11, have issued a one-page joint statement to the producers calling Clarke’s comments “reckless and profoundly wrong.”  Significantly, this is the only statement Blee has issued publicly since the intelligence failure of September 11th and, indeed, the first time his real name has been made public in the major media.

Filmmaker-journalists John Duffy and Ray Nowosielski conducted the interview in 2009 for a documentary to be released on the 9/11 tenth anniversary entitled “Who Is Rich Blee?”, promising further revelations from Commission Chairman Tom Kean and other gov’t insiders, produced by transparency advocates SecrecyKills.com in association with media company Globalvision, winner of the George Polk Journalism Award.  They will be appearing live in-studio on Thursday night to introduce the footage and discuss.

CPT12 obtained world premiere rights after being the first PBS affiliate to air the filmmakers’ 2006 documentary 9/11 Press For Truth, an event that brought the station both controversy and national attention.  That movie received favorable reviews during its brief theatrical run and has aired on national public television in Spain, Norway, and Poland, also Al Jazeera and Australia’s History Channel, telling the story of four September 11th widows who battled the Bush White House for the creation of the 9/11 Commission.

CIA’s failure to tell FBI about the Jan. 2000 U.S. entry of Khalid Al-Mihdhar and Nawaf Al-Hazmi has been well-known since the Congressional Inquiry of 2002.  Hazmi and Mihdhar allegedly served a leadership role in the 9/11 plot and were on the plane that crashed into the Pentagon.  Richard Clarke now sheds considerable new light on the incident.

“To this day it is inexplicable why, when I had every other detail about everything related to terrorism, the Director [Tenet] didn’t tell me, the Director of CounterTerrorism Center [Black] didn’t tell me, the other forty-eight people at CIA who knew about it never mentioned it to me or anyone in my staff in a period of over twelve months,” explains Clarke.  “We therefore conclude that there was a high level decision in the CIA ordering people not to share that information.”

Tenet, Black, and Blee were each promoted or awarded after the attacks and went on to be connected to various Bush-era scandals. All have so far refused the producers’ requests to detail their sides of the story.