At our monthly meetings for August, we will view a recently released DVD of an event held May 19, 2011, in Oakland, California.  The event was sponsored by The Northern California 9/11 Truth Alliance and Project Censored. 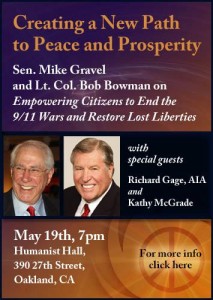 Creating a New Path to Peace and Prosperity

Anyone recognizing the need for a new investigation into the events of 9/11 has experienced feelings of powerlessness.  The entrenched system seems so strong and our democracy so weak at this time.  This program will help you see the bigger picture and discover a new path forward.  There is a lot that is new here.  When have we ever had a courageous former US Senator engaging the 9/11 Truth Movement with a plan of action?

Peter Phillips is the MC and first speaker (6 mins). Professor of Sociology at Sonoma State University in Sonoma, California, and former Director of Project Censored, Peter currently co-hosts The Morning Show on KPFA radio in Berkeley and is President of The Media Freedom Foundation.  For over three decades, he has worked to educate the public on important matters that the corporate media is not reporting.

Richard Gage, AIA, is the dynamic founder of Architects and Engineers for 9/11 Truth, which has grown to over 1500 professionals. He updates us on the many recent activities of AE911Truth (17 minutes).

Next we will hear from Kathy McGrade, a Silicon Valley engineer affiliated with AE911Truth. Her work includes ensuring the safety of firefighters during structural fires. She presents a sharp critique of the government reports attributing the collapses of the three WTC Towers to fire (9 minutes).

As part of his long and distinguished career, Lt. Col. Bob Bowman, USAF ret., ran for President in 2000 and for US Congress in 2006. Bob Scheer of the LA Times called him “probably the best public speaker in the country today,” and this may be his best talk to date.  Dr. Bowman explains why a new and legitimate investigation into the crimes of 9/11 is crucial to restoring the US to the status of a viable democratic republic.  He speaks eloquently about who benefits from our failed attempt at empire (hint: it’s not the people) (33 minutes).

Senator Mike Gravel, two-term US Senator from Alaska (1969-81), is the final speaker (35 minutes).  Gravel first gained national attention when he read the Pentagon Papers into the Congressional Record in 1971. For the last two decades, he has worked to establish a National Initiative process. In 2008, Mike ran for president and released an updated version of his 1971 book “Citizen Power,” a blueprint for how to take the initiative process to the national level.

In this talk, Senator Gravel explains how and why our representative democracy has failed us and what we can do about it.  Constitutional scholars agree that the ultimate power to make laws resides with the people, not with Congress, whose power is derived from the people.  Since Congress is betraying the electorate and bowing to special interests, what we need, and what Senator Gravel proposes, is a national initiative process that can be created and operated by the people themselves, without Congressional involvement.  It would be the largest structural change to our system of government in 225 years, but there has never been a greater need for it than today.  Gravel envisions a partnership between direct democracy and representative government, as in Switzerland.

How does this relate to 9/11?  Senator Gravel is also leading efforts for a series of state initiatives calling for a new, independent investigation of 9/11.  He has recently created a corporation called Citizen’s 9/11 Commission whose purpose is to draft legislation for state initiatives.  Initiative efforts are now underway in Alaska, Oregon, California, and other states.  The democratic process is going direct…our antidote to powerlessness!

Come and hear these well-credentialed speakers, and join us for discussion afterwards.

Where:
Hooked on Colfax Coffee-Books-Community
3213 E. Colfax Ave., Denver (303-398-2665)
(1/2 mile west of Colorado Blvd., between
Adams and Steele, on north side of Colfax)
*Admission Is free, donations are welcome, and buy a beverage from Hooked on Colfax to support them*
Please observe the parking signs: Steele St., 16th Ave., and Colfax Ave. usually have available parking spaces.

When: Wednesday, August 24, 2011, 6 pm – 8:30 pm
Where: University of Colorado, Boulder, Math Building, room 350, third floor, northeast corner
Parking: Paid parking is available on Colorado Avenue or in CU Lot 359 west of the Math Building and directly across from Folsom Field Stadium.
Directions: From 28th St., turn west on Colorado Ave., go through the lights at Regent St. and Folsom Avenue.  The Mathematics Building will be on your left at the Folsom intersection, although you must proceed west to the parking lots and walk back to the building.  http://www.colorado.edu/parking/maps/documents/main_campus_parking.pdf

Upcoming Events for the 10th Anniversary of 9/11:
Toronto Hearings sponsored by The International Center for 9/11 Studies.

Thursday, September 8, 3 pm: Boulder and Denver activists will convene in front of the National Institute of Standards and Technology (NIST) at Broadway and 27th in Boulder for a respectful action to alert the world that we still do not know the truth and that NIST has been part of the cover-up.

Saturday, September 10, 6 pm: Denver will participate in the worldwide premiere of the new Architects and Engineers for 9/11 Truth film, 9/11 Explosive Evidence:  Experts Speak Out, at the  Mercury Café, 2199 California Street, Denver, CO.  Do not miss this one!

Last half of September: Congressional Outreach action.  Constituents are needed who would like to visit the office of their US congressperson and/or senator to discuss the 9/11 issue.  You will be given materials and support from Architects and Engineers for 9/11 Truth.  The tenth anniversary month is an excellent time to speak to your elected representatives.   Don’t delay, as appointments will need to be made early.