Live Streaming: Of special interest, Colorado Public Television (CPT12) will be streaming this live event at:  http://www.cpt12.org/911pressfortruth .  At this link, viewers can also view program details, join the discussion, and pledge support. 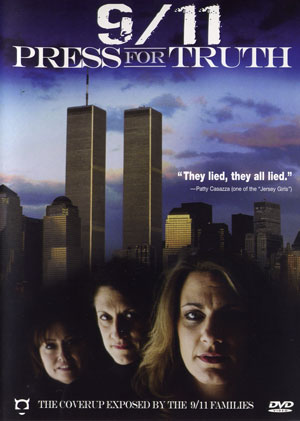 9/11 Press For Truth:  Based in part on Paul Thompson’s exhaustively researched book “The Terror Timeline,” published in 2004 by HarperCollins, the documentary follows three mothers from New Jersey who lost their husbands on September 11th, then led a group of victims’ relatives calling themselves the 9/11 Families Steering Committee in a heart-rending battle with the White House for answers and accountability. For more on the film, see www.911pressfortruth.com.

Appearing live in the CPT12 studios: Shari Bernson of CPT12 and Leland Rucker of Free Speech TV will interview Director Ray Nowosielski, Co-Creator John Duffy, and author Paul Thompson.  The presentation will also include the premiere of some brand new video clips from the filmmakers’ latest project and a discussion by them of the newsworthy revelations therein.

CPT12 is the first PBS station to air content addressing issues of government transparency and accountability with regard to the events of 9/11.  Their PBS premiere broadcast of  “9/11 Press For Truth” in June 2009, with special in-studio guests Director Ray Nowosielski, Producer Kyle Hence, and victim’s family member Bob McIlvaine was a successful fundraiser not without controversy. The station received many viewer responses, pro and con, nationally and internationally.

Over the succeeding months, CPT12 continued down the path of airing controversial documentaries that push the envelope of political and cultural commentary which have been similarly successful in generating pledges and public commentary.  Colorado Public Television is committed to presenting alternative perspectives and to examining information and issues not addressed elsewhere in the mainstream media:  http://www.cpt12.org/about/about_us.cfm

Colorado 9-11 Visibility is a multi-partisan group of Colorado citizens dedicated to achieving a new and truly independent investigation into the events of September 11th, 2001.   For more information, please visit www.colorado911visibility.org.