Please enjoy these photos and stories from our booth at the Denver People’s Fair in June.

For the eighth year in a row, Colorado 9/11 Truth’s display at the People’s Fair in Denver reached hundreds of people with information, brochures, and DVDs. 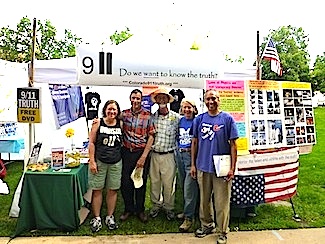 Left to right are Dorothy, Earl, Michael, Fran, and Joseph. Other booth staffers, Matt, Marti, and Bob, appear in photos below.

Joseph’s posters were a hit, with many people standing for long periods reading them. The World Trade Center 7 banner also attracted much attention.

Knowledgeable viewers would often point to the displays and explain the information to friends and family themselves. Other people had never heard of WTC 7 or of any of the evidence we present, so our booth volunteers were there to help.

Here are stories and photos of our interactions. 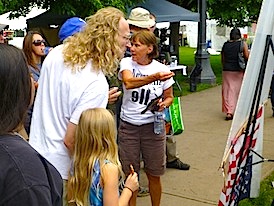 Marti: A very pleasant gentleman and his two teenage children, all originally from El Salvador, stopped by to talk. He said he was at Trinity Church in Manhattan on 9/11. He heard explosions and felt the ground rumble, all of which did NOT coincide with planes hitting the towers. He and his family now live in Denver because he can walk around and not be totally surrounded by high-rise buildings, a situation which he has found traumatizing (not his word, but that was the idea) since 9/11.  I gave them some brochures and the Experts Speak Out DVD, which they gladly accepted. (Photo to left: Marti provides an explanation to onlookers.) 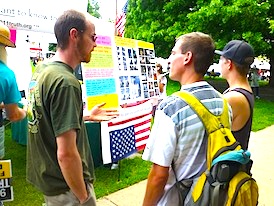 Fran: I overheard a young woman talking to her friend about how she had already studied at her high school the same information we were presenting. Surprised and intrigued, I asked, “Where do you go to school and which teacher let you study this material?” She proudly replied, “Arrupe Jesuit High School. The teacher moved from the U.S. to Canada after 9/11, but he comes back one semester each year to teach his courses. The students love him. He’s our best teacher!” (Photo to right: Matt educates passers-by.) 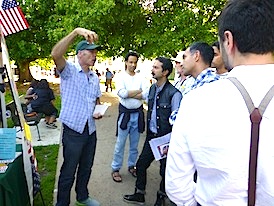 Joseph: A Russian man in his 50’s and his grown daughter were reading the posters. He told me he was very suspicious of the official story on the day of 9/11/01, and he was very surprised we had this booth and were getting this information out. He told me that many Americans don’t know what is really happening in the world, not only about 9/11. For example, Americans and people around the world are not getting the real information about what is going on in the Ukraine. He has been dismayed with how distracted Americans are by sports, shopping, and entertainment. Since he told me that he speaks German as well as Russian, I gave him the international edition of 9/11: Explosive Evidence–Experts Speak Out that has 18 languages with subtitles. (Photo: Enthusiastic fair-goer talks to friends.) 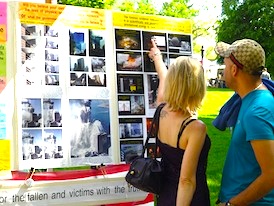 Dorothy: A 21-year-old man said his older brother is in the military and resistant to 9/11 Truth.  I told him not to give up on him, to keep offering him information, and that facing the 9/11 evidence can give people sufficient motivation to leave the service.  After talking to him, I realized an important reason we continue to do this work 14 years after the fact is because of its value as a tool to prevent young people from both entering and staying in our empire’s armed forces. (Photo to right: A couple examines Joseph’s posters.) 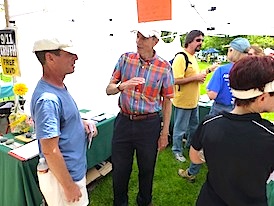 Dorothy: A man with about six children in tow allowed them each to take a cookie. [We had a plate full of free cookies for our guests.] He later returned alone to our booth, sincerely thanked us for our efforts, and took a DVD and some literature.  (Photo to left: Earl, in plaid shirt, explains the evidence.) 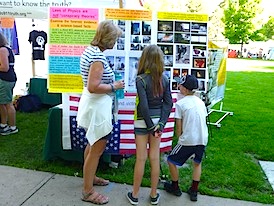 Marti: A woman stopped by with her daughter who was four years old.  The woman was totally on board with 9/11 Truth.  She said that, because of 9/11, she decided to never have children.  Several years later, she discovered she was pregnant.  She recounted a lengthy story of her three-day labor, but finally her daughter was born.  Her daughter’s birthday is September 11! (Photo to right: A family examines one of the posters.) 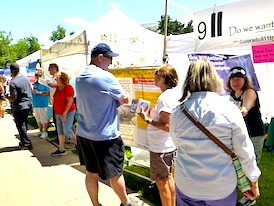 Marti: I spoke at length with a man in his early 20’s who was very interested in our information and accepted our materials.  He said he went to high school in Santa Cruz, and at a high school club, they studied Gary Webb and what happened to him.  He asked me if I had seen Kill the Messenger (the recent Hollywood film about Gary Webb), which I had.  It seemed his high school experience created an attitudinal openness to 9/11 truth. (Photo to left: Marti and Dorothy hand out literature.) 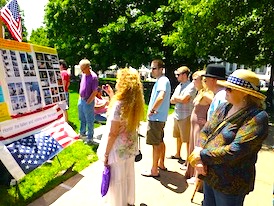 Joseph: A middle- aged couple looked at the poster boards for a long time. They did not know much about 9/11, but they knew about the lies that got us into the Iraq war. “This is really shocking! Disturbing!” they said. “But it doesn’t surprise me, and we’re looking forward to watching these DVDs.” They seemed open-minded and had an overall sense that something was very wrong with the official story. The collapse of WTC 7 was completely new to them. (Photo above: Fair-goers examine the visual evidence.) 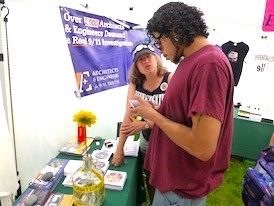 Dorothy: An artist visiting from Iowa applauded our efforts and put $20 in the donations jug, but refused to take a DVD or written literature, saying she just couldn’t face dealing with this information. (Photo to right: Dorothy provides a free DVD.)

Joseph: A middle-aged Mechanical Engineer (ME) from Chile saw media footage on 9/11 when living in Chile. As an ME, he knew something was terribly wrong with the official story at that time. I told him that the laws that were put in place after 9/11 are similar to the laws that were passed in Chile under General Pinochet. He was very pleased and impressed we were there doing this outreach and getting information to the public, and he thanked me several times. I offered him the international edition of the DVD Experts Speak Out, and let him know that he would see in this film other engineers saying the same thing that he was telling to me. 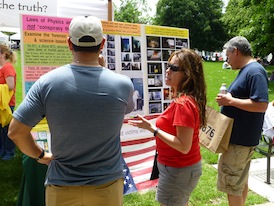 Marti: A woman was intently reading the WTC 7 banner for a long time, so I asked if I could answer any questions.  She looked bewildered and said she had never heard any of this information before.  I offered her a brochure and DVD of Experts Speak Out, which she gladly took.  She looked somewhat shaken but seemed appreciative of the information. [Note from Marti: This is my favorite type of person to talk to – someone who has never heard the alternative evidence but is open to and grateful for it.] (Photo to left: A couple discusses the Twin Tower collapses.)

Fran: A very conservative couple were perceptibly disturbed by the information they saw at our booth, and the man asked, “I just hope this is not being blamed on the Republicans. Do you think people in both parties were involved?” “Yes, in one way or another,” I replied.  “This is not a conservative or a liberal issue; this is an American issue.”

They were relieved, but still obviously shaken by the material in the booth, and the male, in particular, really wanted me to hear his philosophical worldview, which I listened to for a few minutes. Eventually, I turned the conversation back to 9/11 and asked them both, “If what we are saying about 9/11 is true, would you want to know?”  “Oh yes! Definitely!” they replied.

Then he said, “We are delegates for the Republican Party and we are also devout Christians.” I interjected, “You may be interested, then, in this DVD of theologian David Ray Griffin who spoke in Denver at the Iliff School of Theology. It’s called 9/11 and Nationalist Faith. Griffin laments in this talk that it is very common in our era for Christians to have greater faith in their nation than in God.” 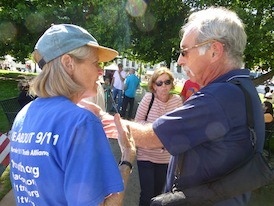 “Oh! We talk about that in our church all the time! And we talk about where there is perfect love, there can be no fear.” I then told them this is exactly how I understand things, so we had genuinely found some common ground!  Upon leaving, they gratefully took the 9/11 and Nationalist Faith DVD and other materials. (Photo to right: Fran dialogues with a guest about the 9/11 evidence.)

The great majority of our encounters with the public were positive, as depicted by the above stories. There were a few more challenging interactions, but nothing like the vitriol that we experienced in the early days of our organization. The following story is one example of a more negative interaction.

Fran: A man passing by with his wife pulled me aside and said, “I honor your right to have your voice, but this upside-down flag at your booth is disrespectful! I was in the military and this is downright disrespectful!”

I replied sincerely, “I am so sorry. We don’t mean to be disrespectful. We see this as a symbol that our country is in dire distress. We mean no disrespect, whatsoever. In fact, we want to prevent people like you from being killed due to lies our government has told us.” He seemed a bit more calmed, but took his leave still feeling somewhat disconcerted. 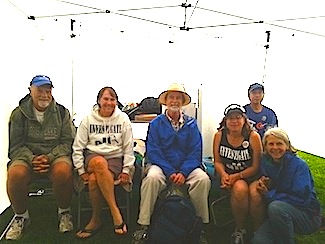 Packing up! Tired but happy with our work of reaching hundreds of people with the evidence about this critical yet silenced subject. (Left to right are Bob, Marti, Michael, Dorothy, Joseph, and Fran.)

Working with YOU for truth and peace!
The Colorado 9/11 Truth Team