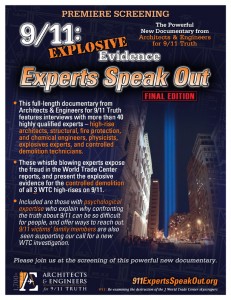 For those who may have missed the Denver premiere of the final edition of 9/11: Explosive Evidence – Experts Speak Out, we will again show this 90-minute film in Denver and Boulder (for Grand Junction, see below). As before, we will have plenty of DVD copies for you to purchase for yourselves and your friends.  It is without doubt one of the best films for those who believe the official story of 9/11 and who may still think that this is a fringe movement!

The film features forty-three technical experts from the nonprofit organization Architects and Engineers for 9/11 Truth who lay out the case for controlled demolition of the three World Trade Center (WTC) skyscrapers based on their individual areas of expertise in high-rise architecture, structural engineering, metallurgy, chemistry, physics, and controlled demolition.

Psychology professionals share their ideas about why the evidence discussed by the technical experts in the film has been difficult for many to face, and suggest how to make it easier to bring this information to others.

Family members of 9/11 victims also bring their viewpoints forward in explaining why they are urgently dissatisfied with the answers they’ve been given by our government, and they ask us to join them in listening to what these experts have to say.

The organization’s petition, signed by over 14,000 concerned citizens in addition to 1,700 architectural and engineering experts, calls upon the U.S. Congress to initiate a new, thorough, and independent investigation into the destruction of the three WTC skyscrapers on September 11, 2001.

“The official story about the attacks of September 11 falls apart when you look squarely at the facts and apply basic scientific principles to interpret them,” says Richard Gage, AIA, founder of Architects and Engineers for 9/11 Truth. “After more than ten years, a high-level investigation of the evidence is long overdue. Too much is at stake here to sweep the concerns under the rug.”

Several of the film’s experts have earned PhD’s, including renowned biologist Lynn Margulis, now deceased. Margulis was a National Medal of Science winner who, along with the other experts in this film, describes unscientific aspects of the U.S. government’s studies of the engineering failures at the World Trade Center.  For instance, she discusses how the scientific method should have been applied to the evidence of nano-thermite explosives found in the WTC dust by an international group of scientists.

The documentary is filled with testimony from other experts such as Les Young, one of several high-rise architects interviewed in the film, who remarks, “I would not have expected the whole building to just give in at once. And I thought it rather odd that they fell almost perfectly….”

Regarding WTC Building 7, materials engineer Kathy McGrade says in the film, “The symmetry is the smoking gun.”

Structural engineer Ron Brookman notes: “The destruction of evidence was a criminal act in itself…. It was already being carted away and destroyed when the FEMA investigators got there about a month after September 11.”

According to retired physics teacher David Chandler: “In order for [WTC 7] to be falling down with zero resistance, it means that the resistance had to have been removed by something else…. You can’t have free fall when there’s support…. If I were a scientist at NIST, I’d be embarrassed to try to put forward something like [what NIST said]. It was clearly a fraudulent argument.”

The NIST report on the Twin Towers blames their destruction on office fires ignited by the jetliner impacts, combined with the removal of fireproofing insulation, knocked off the steel by those impacts. The NIST report on WTC 7, which was not hit by a jetliner, blames fires alone.

Keep in mind that, even today, many people have not heard of WTC 7 or even know that there is a 9/11 Truth Movement! That is the power of the corporate media’s virtual blackout concerning evidence that contradicts the government’s official conspiracy theory.

Where:  Hooked on Colfax Coffee-Books-Community, 3213 E. Colfax Ave., Denver   (303-398-2665)?(1/2 mile west of Colorado Blvd., between Adams and Steele, on north side of Colfax)
*Admission is free, donations are welcome, and buy a beverage from Hooked on Colfax to support them*

GRAND JUNCTION
This month Grand Junction will show Dorothy Fadiman’s film Stealing America: Vote By Vote, which “crunches numbers and shows us that for more than 30 years, exit polls accurately predicted election results. However, over the last twelve years, that reliability seems to have disappeared….”  Find our more thorough description of this excellent film here.

Program: Details can be seen at http://www.meetup.com/GrandJunctionInfoCinema/events/72665142/