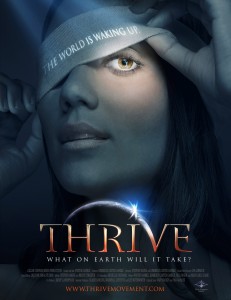 During this season of light and hope, we are honored to present the inspiring documentary film THRIVE: What On Earth Will It Take?           (2 hours, 12 minutes)

Foster Gamble, Executive Producer, was heir to the Proctor and Gamble fortune and was groomed to be a financial leader. Instead, he chose a different path. It all started with a vision he had as a child: a direct experience of universal energy. This epiphany led to a scientific search to figure out how things work.

Eventually, another question plagued him: Why do the majority of humans live in agony and devastation, barely surviving when we could be thriving?

A lifelong search to answer this social question along with his scientific quest into universal energy has led to THRIVE, a master work synthesizing these two seemingly disparate subjects, but as we shall see, not disparate at all. The connecting thread is the desperate human need for “new energy”—sometimes referred to as “free energy” or “zero-point energy.”

The film’s tapestry connects many suppressed and taboo subjects woven around Gamble’s discovery that there is a pattern of universal energy: the torus. The following are excerpts from the THRIVE website : 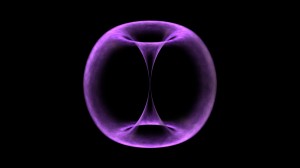 Nature appears to rely on one core recurring pattern to evolve life at every scale—the torus. It is a donut shaped energy vortex that you can see everywhere from atoms to galaxies and beyond….

Most torus dynamics actually contain two toruses—called “tori”—like the male and female aspects of the whole—one spiraling one direction toward the north pole and its opposite spinning toward the south pole.

Amazingly, ancient civilizations seemed to know about this universal (free) energy and passed this knowledge on through texts, oral traditions, icons, stone carvings, and various other means.

Foster and his wife, Kimberly Carter Gamble, put their reputations on the line as they expose a plethora of controversial and rigorously suppressed issues. The brutal suppression of “new energy” inventions (based on the torus) is tied hand in hand with the suppression of the UFO phenomenon. We will learn of the equally brutal suppression of medical cures (especially for cancer), and the control of our food and water supplies, education, and much more.  False flag operations and 9/11 are mentioned as one of the methods for orchestrating problems to which certain people suddenly have solutions, such as the Patriot Act and the resource wars benefiting Big Oil.

Who are these people who want so much control? We are told they are a few extremely wealthy families who are bent on “Full Spectrum Dominance.” That means brutal military control of the entire planet—especially from space. But wait. Isn’t that a neoconservative agenda—which President Obama appears to be inexplicably furthering?

But aren’t these wealthy elite simply exploiting bad situations to make money? Surely it is not possible that they could have orchestrated numerous catastrophes, especially the financial meltdowns that have brought so many countries to their knees (with the USA being next in line). Surely they could not have succeeded at such a plan due to the likelihood of incompetence and that “someone would have talked.” Isn’t “boom and bust” just a natural economic cycle?

The Gambles share their inner struggle as their worldview was challenged time and again as they did their research.

They conclude that we are seeing the results of a purposeful Global Domination Agenda—or, if you will, a New World Order—with top-down, brutal military, technical, and cultural control of the mass of humans, due to the worldview of these few very wealthy families being that of scarcity and fear, with total power their ultimate goal.  Foster says on the THRIVE website:

We are careening into a world of a few haves and billions of suffering have-nots. The Global Domination Agenda section of THRIVE and this site make the case that this is not an accident but an intentional plan. It’s hard to imagine the worldview of individuals who would actually spend their days planning the suffering or elimination of others, but it is critical to consider this if we want to protect one another, as well as our planetary home, and to turn the direction of humanity toward thriving.

THRIVE delivers this message: We are at a turning point; the old way of the world is corrupt to its core and destructive to both environment and humans. We have a choice.  We can do nothing and therefore choose planetary destruction and brutal domination by a few elite, or we can choose a new path of “non-violation” whereby all humans and all species thrive. What can we do? We are given helpful suggestions, but primarily, we are advised to inform ourselves and then listen to our own inner guidance and follow that!

Are we humans a mistake, inherently stupid, violent, and disempowered? Or are we naturally cooperative, creative, and powerful? Amazingly, we leave the film uplifted, with the optimism of the latter.

We hope you will join us (and bring friends) for this excellent film and for what should be a dynamic discussion afterward. If you are unable to come you can rent or purchase the film at  http://www.thrivemovement.com/home.

We offer this film in the spirit of viewing it with an open yet discerning mind. One of our friends, Bob Bows, who works for Ellen Brown’s public banking forum and who has also done lifelong research on the torus, shares a critique of this film.

We will have some special DVDs for a small donation that will supplement some of the information in THRIVE.

Mark your calendars!  Boulder 9/11 Visibility Video and Action Meetings are held the 4th Wednesday of each month.

Program: DVDs described above will be shown, followed by open discussion. Details can be seen at http://www.meetup.com/www-911TruthGroups-org-grandjunction/events/45102132/
For more information, contact Don Plummer: clearup911@yahoo.com