For this month’s gathering, we will show video footage of two very interesting talks given in different cities on September 11, 2011, the tenth anniversary of 9/11.  Anyone who has felt concern that the truth of 9/11 will never become mainstream (and haven’t we all?) needs to see these talks.  Each in its own way, they demonstrate how incredibly far the 9/11 Truth movement has come.  Scientific study and the compilation of factual evidence will continue, and there was a lot of that at the Toronto Hearings over the tenth anniversary period, but these talks are of a different kind.  Our two speakers demonstrate new dimensions of the Truth movement that have evolved during the last few years, as 9/11 Truth moves into the wider culture.

Also, to learn of some exciting current 9/11 Truth efforts, scroll to end of this message.

Laurie Manwell, Ph.D. Candidate in Behavioural Neuroscience and Toxicology at the University of Guelph, near Toronto 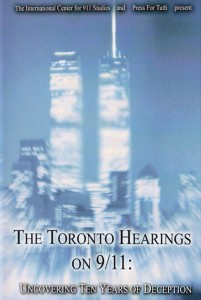 anniversary week, Laurie Manwell helps us to understand how deceptions such as 9/11 and similar crimes enable the state to “sell” what Laurie calls “democracy for the few” to the broader public, and get them to pay for it.  By a sophisticated emotional manipulation, the state portrays American aggression as pro-democratic and aggression by others as authoritarian, thus justifying increasingly aggressive state behaviors.  Social scientists, academics, and experts are clearly catching on to this game, studying how it works in the minds and emotions of the public at large, and exposing its deceptive logic.  This reflects the next stage of the Truth movement, as we become more skillful at unraveling the resistance to the truth in our culture.  But Laurie’s talk is far from a dry, intellectual presentation.  She is as passionate as she is academic.  Citing incidents from her own life and making many connections between our personal and global lives, she provides us with a rousing call to unmask the criminals of 9/11 for who they are.  Laurie also invites the shoddy journalists of our time to wrestle with her over what really happened on 9/11, and warns them that she holds a black belt in kung fu.  (62 minutes including Q/A) 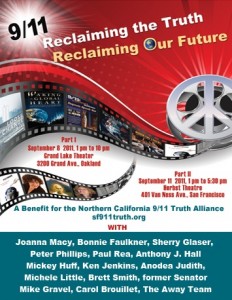 Next we will see Kevin Danaher speaking at the 9/11 tenth anniversary event in San Francisco, which was titled “9/11: Reclaiming the Truth, Reclaiming our Future.”   It is simply remarkable to see someone of Kevin’s stature as a progressive activist speaking with profound clarity about 9/11 Truth.  In addition to explaining the role of 9/11 in the history of US empire, Kevin discusses the psychological resistance to 9/11 Truth he has encountered even among his progressive friends.  He relates how activists with whom he has worked for years and with whom he has been arrested doing civil disobedience actions have had a really hard time coming to grips with the truth about 9/11, but that more and more of them are now doing so.  Kevin Danaher combines a great wit with a spine of steel, and you’ll enjoy this talk.  As one of the best known and most respected progressive activists in the world, he is a tremendous ally to the 9/11 Truth effort, and this talk is a great one to share with any of our progressive friends still sitting on the fence about 9/11. (30 minutes including Q/A)

Where:
Hooked on Colfax Coffee-Books-Community

(1/2 mile west of Colorado Blvd., between Adams and Steele, on north side of Colfax)
*Admission is free, donations are welcome, and buy a beverage from Hooked on Colfax to support them*

Directions: From 28th St., turn west on Colorado Ave., and go through the lights at Regent St. and Folsom Avenue.  The Mathematics Building will be on your left at the Folsom intersection, although you must proceed west to the parking lots and walk back to the building. http://www.colorado.edu/parking/maps/documents/main_campus_parking.pdf

Program: DVDs described above will be shown, followed by open discussion.