This month we will expand our view to the context in which a false flag event such as September 11, 2001, could occur.  In the United States, there have historically been constant efforts by well-heeled interests to crush our democratic republic.  We will explore two of these. 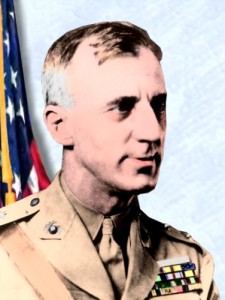 When Franklin Delano Roosevelt won the presidency in 1932, many Americans looked to his bold New Deal plans as the way out of the dark days of the Depression.  But a powerful group of financiers and industrialists saw his economic policies as a threat and devised a plot to replace the U.S. government with a fascist state.

This History Channel film reveals how, inspired by political trends in Germany and Italy, this group conceived of a plan to either overthrow the newly elected president or force him into a subservient position in which he would have to obey their orders.  They envisioned a paramilitary organization of disgruntled WWI veterans as the force to intimidate the government.  The man they chose to inspire and lead this army was a retired Marine officer who had twice been awarded the Medal of Honor, Major General Smedley D. Butler (left photo), a popular, colorful, and outspoken champion of veterans’ rights. But Butler was their undoing.  After discovering the details of the conspiracy, the horrified general blew the whistle and subjected the outrageous plot to the scrutiny of a congressional investigation.

With stunning footage of the 43,000-strong “bonus army” camped out in Washington, D.C., in 1932, we will witness glimpses into our history about which, most likely, many of us have been unaware.

Two excellent books related to this subject are: 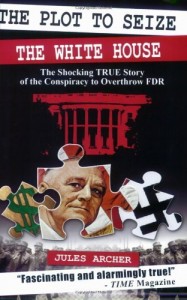 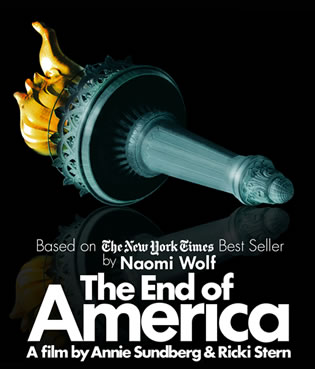 From award-winning filmmakers Annie Sundberg and Ricki Stern (The Devil Came on Horseback and The Trials of Darryl Hunt) comes this provocative and expertly crafted film, based on the New York Times best-selling book by the same name.  With excellent graphics and videos to illustrate her presentation and with a stunning indictment of sweeping policy changes during the Bush years, author Naomi Wolf (The Beauty Myth) makes a chilling case that American democracy is under threat.

Investigating parallels between our current situation and the rise of dictators and fascism in once-free societies, Wolf uncovers ten deeply unsettling similarities—from the use of paramilitary groups and secret prisons to the targeted suspension of the rule of law.  With this galvanizing call to arms, she urges regular citizens to take back our legacy of freedom and justice.

At this link you can read the ten steps of transition from an open society to a closed society:  http://www.endofamericamovie.com/about-film/10-steps-that-close-an-open-society
Due to September 11, 2001, in the United States, all ten of these steps have been accomplished.

For those who missed the premieres of the Pre-Release Version of 9/11: Explosive Evidence – Experts Speak Out, the film can currently be viewed online at http://www.informationclearinghouse.info/article29088.htm.    We strongly recommend you watch the film and help it go viral — it is incredibly powerful to see so many experts giving their testimony on this issue.  It’s a very compelling, “don’t miss” film that you will want to share with friends and family.

The finished version of this excellent film, which will have many added graphics, will be ready in about a month.  You may order it here.

Where:
Hooked on Colfax Coffee-Books-Community
3213 E. Colfax Ave., Denver (303-398-2665)
(1/2 mile west of Colorado Blvd., between
Adams and Steele, on north side of Colfax)
*Admission is free, donations are welcome, and buy a beverage from Hooked on Colfax to support them*
Please observe the parking signs; Steele St., 16th Ave., and Colfax Ave. usually have available parking spaces.

Directions: From 28th St., turn west on Colorado Ave., and go through the lights at Regent St. and Folsom Avenue.  The Mathematics Building will be on your left at the Folsom intersection, although you must proceed west to the parking lots and walk back to the building.  http://www.colorado.edu/parking/maps/documents/main_campus_parking.pdf

Upcoming Events for the 10th Anniversary of 9/11:
Last half of September: Congressional Outreach action.  Constituents are needed who would like to visit the office of their US congressperson and/or senator to discuss the 9/11 issue.  You will be given materials and support from Architects and Engineers for 9/11 Truth.  The tenth anniversary month is an excellent time to speak to your elected representatives.  Please reply to this email if you would like to participate.  Don’t delay, as appointments will need to be made early.