by Fran Shure and Tim Boyle 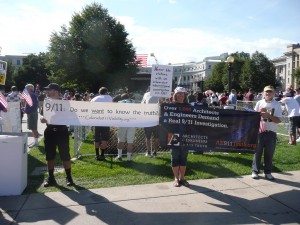 On the afternoon of 9/11, Colorado Governor John Hickenlooper and Denver Mayor Michael Hancock were hosting “Colorado Remembers 9/11,” a large, patriotic memorial to the lives lost on 9/11 and a tribute to our military at Denver’s Civic Center Park, which lies between the gold-domed State Capitol building and the County Court House.  There would be military flyovers, taps, a firing salute, a children’s chorale singing the national anthem, a Beach Boys concert, and all the patriotic, nationalistic fervor of a nation remembering the terrible attacks of ten years earlier.  Thirty thousand people showed up.  The ceremony began with a procession of flags, drums, and bagpipes, and hundreds of police, firefighters, first responders, and military personnel.   A traveling memorial of bent and twisted steel from the twin towers draped with a huge American flag brought to mind the violence and devastation of that day in Manhattan.  Police were everywhere, and snipers could be seen brandishing weapons on nearby rooftops. 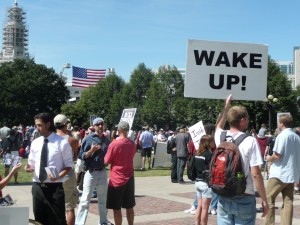 A few days earlier, the Colorado 9/11 Visibility team and We Are Change Colorado were planning how to get some truth out at such an occasion.  Imagining a crowd deeply steeped in the official story passing the beer and calling for more militarism, there was some trepidation about trying to flyer or hand out DVDs.  We weren’t sure how the Truth message would be received.

The fifty activists who came for this special event walked with some trepidation into the park in single file with their banners, divided into several smaller groups, and spread out among the crowd in various locations. Some of their signs read “Honor the Victims with the Truth,”  “Over 1,000 Architects and Engineers Demand a Real 9/11 Investigation,” “Did You Know Three NY 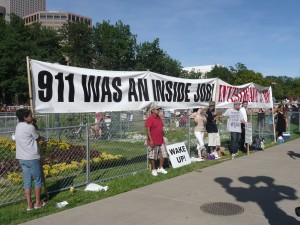 But it turned out the crowd was mostly there to relax in the late summer sun and enjoy the Beach Boys.  To the pleasant surprise of the activists, people started reading the signs with interest.  Excited to see us there, a few people even emerged from the audience to help hold the banners and signs.  A crowd favorite was the WTC7 banner which explained how the building collapsed.  All afternoon, people at the event read that sign and then asked for a DVD and flyer.  For many, this was the first time they had heard about controversial Building 7.

Each of the small groups had a similar experience.  Many friendly conversations ensued as members of the public asked questions, thanked the 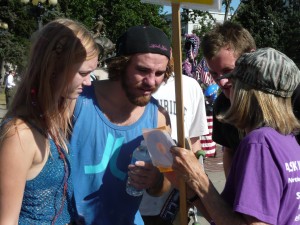 activists for being there, and shared their own awareness.   While the huge majority of comments were favorable, there were a few of the usual verbal taunts, which were allowed to pass without incident.  One particularly ironic joust was directed to an activist of Lakota Sioux heritage.  “Go back to your own country!”  Although it may have been lost on the intolerant individual to whom it was directed, without missing a beat the activist responded, “This is my country!”  The activists distributed over 1500 DVDs with flyers, including many copies of 9/11: Blueprint for Truth.

Three days earlier, on September 8, Colorado 9/11 Visibility and We Are Change Colorado returned to the site of the National Institute of Standards and Technology (NIST) in Boulder for a late afternoon action.   They took up their posts on the sidewalk in front of NIST at an intersection where their banners would be seen by hundreds of NIST employees leaving work for the day and by thousands of motorists on busy Broadway Avenue. 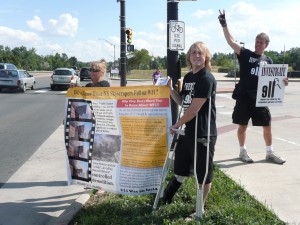 Many drivers honked their horns in approval and waved.  At every red light, 9/11: Blueprint for Truth DVDs and leaflets were handed out to the drivers, pedestrians, and bicyclists stopped at the intersection.   For many, it was no doubt their first exposure to 9/11 Truth, and while stopped they had time to see some photographic evidence and read the large banner describing the mysterious “collapse” of the third WTC skyscraper on 9/11 — World Trade Center Building 7. 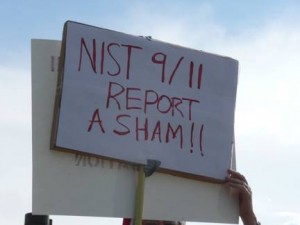 A set of seven signs was designed to reach moving traffic with a simple message spread across the signs, like the old Burma Shave highway ads in which a cute ditty strung along the side of the highway advertised their product.  Marti Hopper of Boulder 9/11 Visibility devised this one which brought smiles and honks:

Find the facts … You may … Have missed … 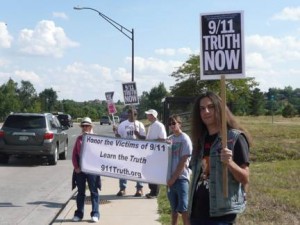 After their three-hour action, a couple of activists couldn’t resist driving up to the security station at the NIST entry, introducing themselves, and presenting NIST with a copy of the pre-release version of 9/11 Explosive Evidence: Experts Speak Out.   They informed the guards of the impressive credentials of some of the experts in the documentary directly criticizing the NIST reports.  The security guards promised to deliver the DVD to the NIST Communications Director.

Premiere showings of the pre-release version 9/11: Explosive Evidence – Experts Speak Out were held in Colorado Springs, Denver, and Grand Junction, with much positive feedback—and suggestions—for this new and exciting documentary.

Throughout the week of the 10th anniversary, three 9/11 Truth documentaries were broadcast by Colorado Public Television Channel 12 (CPT12), reaching 1.8 million households along the Colorado front range.

CPT12 is the only PBS station in the United States with the journalistic integrity to broadcast these films.

9/11 Press For Truth, 9/11: Blueprint For Truth, 9/11 Loose Change: An American Coup were each aired several times during the tenth anniversary period.

Please support CPT12 by donating to the station online and indicating that you appreciate the station’s willingness to broadcast scientific evidence and analysis, and alternative perspectives on the events of 9/11.