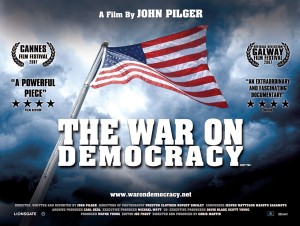 For this holiday season of light and hope, we present The War on Democracy.  While not specifically a film about 9/11 or false flag operations, the story of this film emanates from the same source—empire, a word you will rarely see in our corporate-owned media.

Empire entails both deception and brutality, and yet we find ourselves inspired at how some of the poorest countries of Latin America have risen from the ashes of imperial exploitation to find real grassroots democracy.  This film won the Best Documentary Award in the 2008 One World Awards.

Award-winning journalist John Pilger demonstrates the brutal reality of the notion of “spreading democracy.”  In fact, the U.S. is actually conducting a war on democracy.  Yet today, true popular democracy is more likely to be found among the poorest of Latin America than in our own country.

The War on Democracy shows how U.S. interventions, overt and covert, have toppled legitimate governments in the region since the 1950s. The democratically elected Chilean government of Salvador Allende, for example, was ousted by a U.S.-backed coup in 1973 and replaced by the military dictatorship of General Augusto Pinochet for the purpose of resource exploitation.
Guatemala, Panama, Nicaragua, Honduras and El Salvador have all been invaded by the United States for the sake of the U.S. empire and corporate special interests.

The film shows several jaw-dropping interviews with ex-CIA agents who took part in secret campaigns against democratic countries in the region.  In the film, Pilger investigates The School of the Americas at Fort Benning, Georgia, where the U.S. military trained Pinochet’s torture squads, along with tyrants and death squad leaders from Haiti, El Salvador, Brazil and Argentina.

Pilger unearths the real story behind the attempted overthrow of Venezuela’s President Hugo Chávez in 2002 and how the people of the barrios of Caracas rose up to force his return to power.

It also looks at the wider rise of populist governments across South America led by indigenous leaders intent on loosening the shackles of Washington in order to have a fairer distribution of the continent’s natural wealth.

John Pilger says: “[The War on Democracy] is about the struggle of people to free themselves from a modern form of slavery.”  These people, he says, “describe a world, not as American presidents like to see it as useful or expendable; they describe the power of courage and humanity among people with next to nothing.  They reclaim noble words like democracy, freedom, liberation, justice, and in doing so they are defending the most basic human rights of all of us in a war being waged against all of us.”

Video: The War on Democracy

We hope you can join us for this inspiring film–and bring a friend!

“Where ignorance is our master there is no possibility of real peace.” Dalai Lama