Members of the Colorado 9/11 Truth team will be conducting a presentation entitled, “The False Flag Attack: An Old, Immoral, but Common Pretext for War.”

False flag attacks are covert operations designed to place blame on a falsely accused enemy. They are typically used to create fear and outrage among a populace in order to rally support for war. 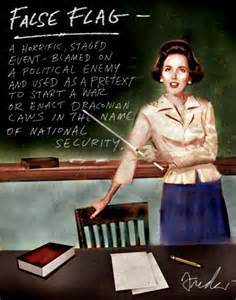 The Gulf of Tonkin incident to start the U.S. war against Vietnam is a well-documented example.

“Voice or no voice, the people can always be brought to the bidding of the leaders. That is easy. All you have to do is tell them they are being attacked and denounce the pacifists for lack of patriotism and exposing the country to greater danger.” — Hermann Goering at the Nuremberg trials