We are indeed pleased to co-sponsor the author of the newly released book, Conspiracy Theory in America, Dr. Lance deHaven-Smith. He will be in Denver, Colorado, for two presentations and book signings. Dr. deHaven-Smith will discuss the history and destructive implications of the term “conspiracy theory.” He will also 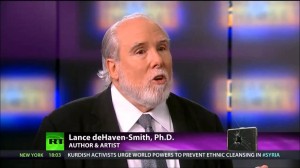 share with us his research on State Crimes Against Democracy.

State Crimes Against Democracy (SCADs) are illegal or extra-legal actions committed at the highest levels of public office. According to Dr. deHaven-Smith, examples of SCADs that have been officially proven include the Watergate break-in and cover-up, and the illegal arms sales of Iran-Contra. State Crimes Against Democracy should become a household term because it is desperately needed to give an organizing clarity to a special type of political high crime, one that threatens democracy itself, as opposed to political corruption for personal gain such as embezzlement or kick-backs. 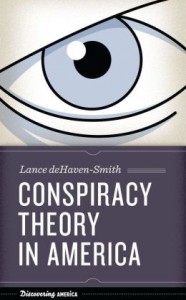 At the Tattered Cover, Dr. Lance deHaven-Smith will discuss the origins and destructive implications of the term “conspiracy theory” as a dismissive put-down in U.S. public discourse.  Most Americans are unaware that the conspiracy-theory label was popularized by the CIA in a global propaganda program to deflect criticisms of the Warren Commission’s conclusion that President Kennedy was assassinated by a lone gunman.  The label has become a verbal defense mechanism used by political elites to suppress mass suspicions that inevitably arise when shocking political crimes benefit top leaders or play into their agendas, especially when those same officials are in control of agencies responsible for preventing the events in question or for investigating them after they have occurred. DeHaven-Smith’s presentation will be drawn from his new book, Conspiracy Theory in America, which was published in April 2013 by the University of Texas Press.

At the First Universalist Church of Denver, Dr. Lance deHaven-Smith will discuss the growing body of theory and research on elite political criminality in the United States.  In a 2006 peer-reviewed journal article, deHaven-Smith coined the term State Crimes Against Democracy (SCAD) to delineate a crime category for Watergate, Iran-Contra, Plame-gate, and other conspiracies in high office.  SCAD research has been highlighted in special issues of American Behavioral Scientist (February 2010) and Public Integrity (June 2011).

Please join us for these events:

We hope that you will forward this announcement far and wide and that you will join us for one of these presentations by Professor deHaven-Smith.

Bio: Dr. Lance deHaven-Smith is Professor in the Reubin O’D. Askew School of Public Administration and Policy at Florida State University. A former president of the Florida Political Science Association, deHaven-Smith is the author of more than a dozen books, including The Battle for Florida, which analyzes the disputed 2000 presidential election. DeHaven-Smith appeared on Good Morning America, the Today Show, NBC Nightly News with Tom Brokaw, CBS News with Dan Rather, the NewsHour with Jim Lehrer, and has appeared on other national TV and radio shows.