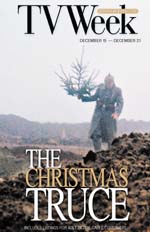 During this Christmas/holy-day season of “Peace on Earth and Goodwill to All,” please join us for our December meetings as we screen two films, both of which illustrate the power of peace, humanity, and nonviolence:  The Christmas Truce (44 minutes), is a dramatized documentary, and the second film is a 30-minute segment on the Civil Rights Movement from the documentary A Force More Powerful.

The Christmas truce was a series of widespread unofficial ceasefires that took place along the Western Front (the Belgian-French-German border) during World War I. They began at Flanders Fields a few days before Christmas, 1914. In one of the truest acts of goodwill toward men, both German and British soldiers set aside their weapons and hatred, if only temporarily, and met in the flat area between their trenches, known as “No-man’s-land.” 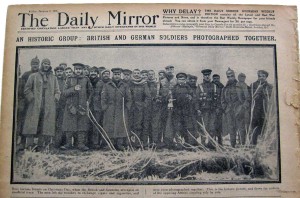 The two sides embraced one another, exchanged gifts, shared photos from home, and sang together. There was even a documented case of soldiers from opposing sides playing a good-natured game of football (soccer). Soldiers took the opportunity to bury their dead, sometimes in joint burial services.

This spontaneous demonstration of goodwill and brotherhood spread about two-thirds (400 miles) along the front line, involved approximately 100,000 soldiers, and lasted about two weeks. It ended only when officers threatened to court-martial soldiers who fraternized with the enemy–a crime punishable by death–demonstrating that without coercion from authority, humans resist killing one another.

The Christmas truce of 1914 is seen as a symbolic moment of peace and humanity amidst one of the most violent events of modern history. 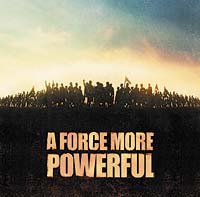 A Force More Powerful explores one of the 20th century’s most important but least understood stories: how nonviolent power has overcome oppression and authoritarian rule all over the world. Narrated by Ben Kingsley, and nominated for an Emmy, A Force More Powerful was originally released as a feature-length film that played in festivals worldwide; the film was then expanded into a three-hour television series that aired nationally on PBS in 2000, and has since been seen around the world.

A Force More Powerful explores how popular movements resisted entrenched regimes and military forces by using unconventional methods. These included acts of civil resistance and noncooperation that obstructed the operations of government as well as direct intervention –– in the form of sit-ins, nonviolent sabotage, blockades, boycotts, and general strikes –– all of which frustrated many rulers’ efforts to suppress people.

The historical results were far-reaching: tyrants were toppled and governments overthrown, occupying armies were impeded, and repressive political systems were shattered. Entire societies were transformed, suddenly or gradually, as nonviolent resistance neutralized the repressors’ abilities to control events.

Episode one:  In the 1960s, Gandhi’s nonviolent methods were taken up by black college students in Nashville, Tennessee.  Reverend James Lawson, a black Methodist minister in Nashville, had studied Satyagraha (literally “holding firmly to truth,” through nonviolent action) under Gandhi.

Highly organized, coordinated, disciplined, and strictly nonviolent, trained students and civil rights activists successfully desegregated Nashville’s downtown lunch counters in five months, becoming a model for the entire Civil Rights Movement. After the successes in Nashville, the leaders were able to take these strategies and methods elsewhere in the country, resulting in a partial but important transformation of our American society.

At a time when violence is still too often deployed, A Force More Powerful dramatizes how ordinary people throughout the world, working against all kinds of opponents, have taken up the cause of truth and justice with nonviolent actions, and prevailed.

Please join us for these enlightening and inspiring documentaries, followed by a lively discussion.  Cookies and holiday treats will be provided in Denver.  See you then.
————————————-

BOULDER
Mark your calendars!  Boulder 9/11 Visibility Video and Action Meetings are normally held the 4th Wednesday of each month.

Program: Details can be seen at http://www.meetup.com/GrandJunctionInfoCinema/events/95192902/