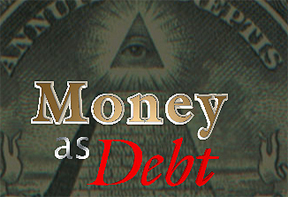 “I believe that banking institutions are more dangerous to our liberties than standing armies.  If the American people ever allow private banks to control the issue of their currency, first by inflation, then by deflation, the banks and corporations that will grow up around the banks will deprive the people of all property – until their children wake-up homeless on the continent their fathers conquered.”    ~Thomas Jefferson, 1802

In solidarity with the aims of the hundreds of Occupy Wall Street protests around the world, this month we will diverge from our usual 9/11 Truth focus and explore the subject of the dominant worldwide economic system that has served the 1% rather than the 99%.

Is there a tie-in to 9/11 Truth?  9/11 was used to justify the invasion and occupation of weaker countries and countries with natural resources and strategic importance.  Those who have subscribed to the economic system in which the dollar reigns supreme have been subjected to another form of invasion and enslavement, even a more effective one than military occupation.  We must understand money and how it can be another “weapon of imperialism.”

With five video segments, we will look at what is wrong with our financial system and how it is destructive to individuals, societies, and the environment. Then we’ll explore some specific solutions, including the Public Bank Movement currently under way in fourteen states.

The five video segments that will be screened are:

1.  Operation Checkmate: The Pawns Fight Back by Chris Pratt   (9 minutes)
Corporate fascism means big business is big government. This is the system we have devolved to in the US.  An unregulated, private Federal Reserve benefits the bankers who own it, not the public, resulting eventually in a police state with horrendous devices to control a restless population, such as the Active Denial System, which can indiscriminately subject an entire crowd of protesters to extreme pain by boiling the water in the epidermis of the skin.  Is this the world that we want for ourselves and our children? What can we do to regain control and refuse to be the pawns in this game?

2.  Taking Control of Our Money by Bob Bows   (8 minutes)
There are many sacred cows in different cultures. One of our sacred cows is Wall Street.  We are told that due to our extreme indebtedness, there is not enough money for public services. However, the US has plenty of money–it’s just in the hands of the banks and corporations, not the people.

Money represents debt and our economic system requires debt. The Federal Reserve is a privately owned bank which serves its owners, the “too-big-to-fail” banks.  In 2008, the bailout of these banks cost the taxpayers $16 trillion, whereas the debt of the entire 235-year history of the US was $14 trillion!  This money could have secured the public interest but was instead diverted to shore up private interests.  It was an unprecedented transfer of wealth to the richest segment of society with US taxpayers left holding the bag!

What is the solution?  One possibility is public banks, as we can see with the example of the Bank of North Dakota.  The economic crisis of 2008 did not result in a budget crisis for this state, since its public bank invests in Main Street, not Wall Street.  Join us and learn more about how North Dakota remains solvent and is thriving!

3.  James Turk Interviews Marion Mueller   (15 minutes)
James Turk, Director of The Gold Money Foundation (www.goldmoney.com), interviews founder of www.OrovFinanzas.com., the first website educating Spanish-speaking peoples about gold.  Mueller tells us that money is at the core of democratic systems.  Without an understanding of money and the role of gold, we cannot have a democracy.  We need a level playing field on which everyone can participate on the same footing.  How do we succeed with this transformation?  It is not by revolution in the streets, but by working for a new economic system based on “sound money.”  The most important thing is transparency.  In Spain, the unemployment is over 20% and for the youth, it is over 40%.  This could happen in the U.S. if we fail to transform the current system!

4.  Decoded: Fort Knox, a recent episode from Brad Meltzer’s “Decoded” series (The History Channel)   (44 minutes)
With a format similar to the TV series Conspiracy Theory with Jesse Ventura, Brad Meltzer and his team investigate the rumor that there is no gold in Ft. Knox, Kentucky, the heavily guarded structure built to house the gold that was forcibly collected from US citizens under Franklin D. Roosevelt in 1933.  The public has not seen this gold since 1974.

In 1971, the US moved from a gold-backed to a confidence-based dollar, which relies on supply and demand to determine what a dollar is worth.  So why can’t we see the gold and why would the government lie to us?  Would they? Could they?  We will hear from a gold expert from GATA (Gold Anti-Trust Action Committee) about the rigging of the price of gold and why it matters, from a foreign policy analyst, from a Princeton graduate in Financial Engineering living off the grid, and from a former US Senator from Kentucky, Dee Huddleston.

Questions explored and answered in this fascinating program:
Has the gold in Ft. Knox been sold or compromised over the decades to suppress the price of gold in the open market and thus maintain the illusion of a strong dollar?  Chris Powell of GATA asserts that this gold price suppression has been the central objective of US foreign policy for over fifty years.  By maintaining the illusion of a strong dollar, he claims that the US has been able to use its advantage in the currency markets as a weapon of imperialism to dominate and indeed enslave other countries.

What would be the impact on the US dollar if there really is no gold in Ft. Knox, or if we no longer own whatever gold might still be there?

The program ends ominously while reminding us that whatever difficulties lie ahead, we must have confidence not in gold but in each other to make it through.

5.  Money as Debt   (final 18 minutes)
This film explores a public money system.  We will discover:

1) Why is exponential growth necessary for our current economic system and how is this devastating for a sustainable economy and for the environment?

2) What does it mean to have a value-based public money system rather than the gold standard?  Could this system put an end to the unsustainable economic growth curve which so threatens the welfare of our planet and serves only the elite, not the entire population?

As we explore our economic system in these documentaries, we will find agreement that the Federal Reserve system, which is governed by private banks and serves the interests of banksters and not the people, is unworkable and must be reformed.  We will look at two of the most commonly proposed solutions:  a system based on what is called “sound money,” or money backed by gold, silver, or other real goods; and a public economic system which advocates for the increase of money based on the increase of value in a community.  We’ll look at the Bank of North Dakota, the only state-owned bank in our nation, which incorporates elements of this approach and promotes local sovereignty and freedom from Wall Street.  An interesting discussion should follow!

Where:
Hooked on Colfax Coffee-Books-Community

*Admission is free, donations are welcome, and buy a beverage from Hooked on Colfax to support them!