Below is the information for our March 2015 meetings. We hope you will join us! 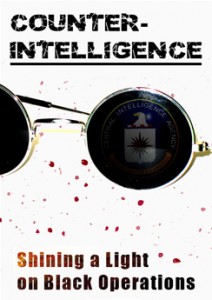 Shining a Light on Black Operations

Counter-Intelligence is a five-part documentary that explores the vast and secret National Security State that operates throughout the United States—and indeed, the world. The series examines the foundations of the Military-Industrial-Intelligence Complex, charting through to the myriad consequences in today’s world where secret intelligence organizations continue to manipulate elections, overthrow foreign governments, and commit heinous crimes against humanity, all under the guise of “national security,” “spreading democracy,” “fighting communism,” and currently, “fighting terrorism.” In the wake of the continuing revelations of the NSA’s PRISM clandestine surveillance program, this documentary is now more important than ever to provide a solid historical context to the workings of the rapacious and ever-expanding National Security State.

Counter-Intelligence – Part IV: Necrophilous investigates how organized violence and torture have been used as tools throughout clandestine operations, intelligence gathering, and outright war. The evidence of the abuses at Abu Ghraib and Guantanamo shed light on the US security state’s policies and attitudes toward those who resist or are accused of resisting the American Empire’s global hegemony. Also examined are attitudes toward civilian casualties in modern war, as well as the unending narrative of “terrorists” and the consequent Islamophobia—largely a construct of corporate-controlled media propaganda—which is the driving force behind America’s so-called “war on terror” (the “war without end”) and Americans’ tolerance for crimes against humanity and “collateral damage.”

Part IV: Necrophilous follows brilliantly the evidence presented in Part III: The Strategy of Tension on the history of false flag operations. (See more information and link below.)

“An extraordinary work by a gifted filmmaker, Counter-Intelligence shines sunlight into the darkest crevices of empire run amok. The film vividly exposes a monstrous and unconstitutional ‘deep state’ in which multiple competing chains of command—all but one illegal—hijack government capabilities and taxpayer funds to commit crimes against humanity in our name. Anyone who cares about democracy, good government, and the future will want to watch all five segments of this remarkable film.”
– Robert David Steele Vivas: Former CIA Officer, USMC

Mark your calendars! Colorado 9/11 Truth Video and Action Meetings are held on the 3rd Friday of each month in Denver.

*Admission is free; donations are welcome, and buy a beverage from Hooked on Colfax to support them.*

Mark your calendars! Colorado 9/11 Truth Video and Action Meetings are held on the 4th Wednesday of each month in Boulder.

Where: CU Boulder Campus, ATLAS Center Building, Room 1B25 (Down one flight from the main entry level)

*Admission is free; donations are welcome*

Parking: Paid parking ($4 evening flat fee) is available in the Euclid Auto Park on Euclid Avenue (walk due north to the ATLAS Center Building) or in Lot 360 directly across the street from Folsom Field Stadium (walk due west to the ATLAS Center Building). See a campus map here: http://www.colorado.edu/pts/sites/default/files/attached-files/UCB_ParkingMap2012-13_WEB_1.pdf

If you are unable to attend the monthly meeting, Counter-Intelligence – Part IV: Necrophilous can also be viewed at: https://www.youtube.com/watch?v=A4Z-AK_FTEY or at https://vimeo.com/67633913

Also see Counter-Intelligence – Part III: Strategy of Tension (55 minutes) at https://www.youtube.com/watch?v=wartD6l8Ob8. This segment examines the history of false flag operations used for war, propaganda and psychological operations—or “psy-ops.” Operation Northwoods and Operation Gladio are examples used to illustrate the nature of clandestine operation planning and execution. The film also sheds light on the intent and extent to which the National Security apparatus manipulates events and manufactures outcomes to suit its goals. This crucial, eye-opening information is especially relevant as we now are recognizing how the so-called “ISIS” narrative is currently being propagated by government officials and mainstream media as yet another pretext for the ongoing “war on terror” and for US military operations in Syria, Libya, Yemen, Iraq, Afghanistan, and other countries.