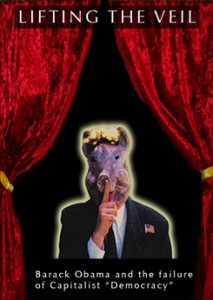 As election day approaches, we will present this long-overdue documentary by Scott Noble (PsyWar) exposing the deadly hypocrisy of the U.S. political system. The film argues that we will not achieve any meaningful change through the electoral system, and that a systemic overhaul is necessary for a truly democratic republic. Contrary to all we have been taught, democracy cannot survive hand in hand with our current form of capitalism.

President Barack Obama is the best example of this thesis. We see his beautiful (and seemingly sincere) campaign promises, and then his proactively breaking each promise. As with the majority of campaigning politicians, he makes promises that the people want to hear, but once in office, does the exact opposite: he supports the interests of the corporations who paid for his campaign.

According to Glen Ford of the Black Agenda Report: Obama is not merely a continuation of the Bush administration’s war policies. He has accelerated the descent into a war economy. If Obama remains in office, he is on track to become the biggest pro-war president in U.S. history.

If we believe that he removed all troops from Iraq, Lifting the Veil will aid us in understanding how we have been deceived. If we still believe he is the “lesser of the two evils,” and—for only one example—has stopped torture, this film will remove the thick wool from our eyes. In fact, as evidenced by this documentary, Obama has accelerated our descent into corporate fascism. So what can we do?

Please join us in a lively discussion afterward during which we can pick up where the film leaves off in sharing our own ideas regarding solutions to this crucial question. Or if you disagree with the premise of this film, please share that as well!

If you are unable to join us, you may see the film online here. Many of the statements in the film about Obama can be found here, with sources for those statements.

“We can have democracy in this country or we can have great wealth concentrated in the hands of the few, but we can’t have both.”    ~ Louis D. Brandeis, Associate Justice of the U.S. Supreme Court (1916 – 1939)

Program: Details can be seen at http://www.meetup.com/GrandJunctionInfoCinema/events/86909242/