UPDATE:  Not only is the film 9/11: Explosive Evidence – Experts Speak Out being streamed online worldwide through September 2, but Colorado Public Television (CPT12) is also providing local encore airings of this film and of 9/11: Blueprint for Truth this week.  Please let your friends know these times, and if you have not, please donate whatever you can afford to CPT12 now!

We all have to be the media. Corporate-owned media has yet to present this content, but independent, gutsy Colorado Public Television (CPT12) will be premiering this excellent film—9/11: Explosive Evidence – Experts Speak Out — the only PBS station in our nation, so far, to do so. Let’s show CPT12 how very much we appreciate them!

Watch this documentary from anywhere in the world, call in (1-800-690-5234) to the station or login to donate telling them how much you appreciate their showing this film, share on Facebook or Twitter, make a comment online, and forward this announcement generously to your contacts–this needs to go around the world!

With the help of all of you, this will be a success!

Colorado Public Television – Channel 12 (CPT12) airs the bold new documentary highlighting the grave concerns of 1,700 Architects and Engineers who are demanding a new investigation of the destruction of all three World Trade Center high-rises on 9/11. The DVD and other materials will be offered as pledge premiums during this season’s fund-raising drive.

Live Streamed: CPT12 will be streaming this important event over the Internet through Sunday, September 2, 2012, at:  www.cpt12.org/911ExplosiveEvidence. Details of encore airings and public comments can be found at this link. 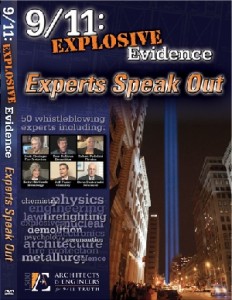 9/11: Explosive Evidence: Experts Speak Out: This new documentary by Architects and Engineers for 9/11 Truth features dozens of credentialed technical and building professionals who cite scientific evidence indicating that the World Trade Center (WTC) Twin Towers and WTC Building 7 were not brought down on September 11, 2001, by the office fires ignited by the jetliner impacts, but rather by explosive controlled demolition. The 43 architects, engineers, physicists, chemists, and others interviewed in the film represent more than 14,000 concerned citizens and over 1,700 architects and engineers from around the world who have signed the petition demanding a new, independent investigation. The film details scientific, forensic evidence that the group claims was omitted or misrepresented by the official reports. Official reports blame the unprecedented destruction of the Twin Towers on jetliner impacts and resulting fires. No jetliner crashed into WTC 7. Its free-fall implosion was blamed on normal office fires.

The documentary also presents interviews with several psychologists who share their insights about why the evidence discussed by the technical experts in the film has been difficult for many to face, and how to make approaching others less stressful with this controversial issue. Family members of 9/11 victims speak to the viewers and explain why they are still angry as a result of a lack of answers from our government. They ask that we join them in looking at what these experts have to say.

Appearing live in the CPT12 studios:  San Francisco Bay Area architect Richard Gage, AIA, and founder of Architects and Engineers for 9/11 Truth, will join Shari Bernson and Tom Colbert in the CPT12 studios for questions.  Gage has recently completed a national tour with this new, landmark film.  Frances Shure, MA, LPC, one of the eight psychology professionals in the documentary, will also be an in-studio guest.

History: Due to visionary Development Director Shari Bernson’s leadership, CPT12 is the first US broadcaster and PBS station to air content addressing alternative theories and suppressed news about the events of 9/11. Their US premiere broadcast of 9/11 Press for Truth in June 2009 was a successful fundraiser, but not without controversy. The station received many viewer responses, pro and con, nationally and internationally. Bernson welcomes the debate, noting that “CPT12 has always supported airing alternative voices that have received censorship in the mainstream media.”

In previous years, CPT12 aired the documentaries 9/11: Blueprint for Truth, America: Freedom to Fascism, Loose Change 9/11: An American Coup, and The World According to Monsanto, among others, which were similarly successful in generating pledges as well as public commentary.

Mission Statement: Colorado Public Television is committed to presenting alternative perspectives and to examining information and issues not addressed elsewhere in the mainstream media:  http://www.cpt12.org/about/about_us.cfm?

Note: Both Denver and Boulder monthly meetings will be cancelled this month!