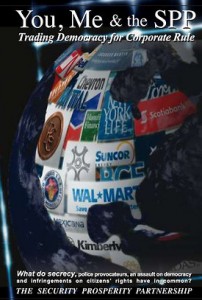 What do secrecy, police provocateurs, an assault on democracy, and infringements on citizens’ rights have in common?

Colorado 9/11 Visibility is proud to present this month the latest, feature length, documentary film by Paul Manly, You, Me and the SPP, which exposes the latest manifestation of a corporatist agenda that is undermining the democratic authority of the citizens of North America.

Two processes, the Security Prosperity Partnership (SPP) and the Trade Investment Labour Mobility Agreement (TILMA), are rapidly eroding and eliminating standards, civil liberties, regulatory systems, and institutions put in place over generations through the democratic process. Proponents of the SPP and TILMA say that they are needed to keep trade flowing; opponents say these agreements not only undermine the democratic authority of citizens, they threaten the sovereignty of the three nations through the integration of military, security structures, and regulatory regimes.

A few quotes from the film:

“… what the SPP really represents is a parallel government, so that the important decisions are either made outside of parliament and outside of legislatures or they make it impossible for those kinds of decisions to be made in those legislative bodies, so that democracy is slowly being gutted.”                        – Murray Dobbin, Canadian author, journalist

The U.S.-Canada Security Perimeter and the Political Consolidation of North America   http://www.globalresearch.ca/the-u-s-canada-security-perimeter-and-the-political-consolidation-of-north-america/26664

The Militarization and Annexation of North America: The Security and Prosperity Partnership (SPP) unmasked   http://www.globalresearch.ca/the-militarization-and-annexation-of-north-america/6359

North American Union: The SPP is a “hostile takeover” of democratic government and an end to the Rule of Law   http://www.globalresearch.ca/north-american-union-the-spp-is-a-hostile-takeover-of-democratic-government-and-an-end-to-the-rule-of-law/6456

If you cannot join us, you can see the trailer and purchase the DVD at the film’s website.

A few additional quotes from the film:

“…if we go along with the Americans on their military, on their human rights, on their Patriot Act, on immigration and refugee policy, on energy, on all kinds of regulations over pesticides or whatever, then they will allow us access to their markets.”  – Gordon Laxer, Director, The Parkland Institute, Alberta

“The ultimate goal, quite obviously, is to create such tight integration that effectively we only have one North American political, security, military and economic place – that there really are no differentials between this country and the country next door.”  – Michael Byers, Canada Research Chair, Global Politics and International Law, UBC

“The SPP is a dumbing down, a reducing of quality of life, a reducing of standards, and there is absolutely no indication in any of the documents we’ve been able to obtain through hard pushing through access to information, and through diligent work, not a single indication that we’re looking for a higher standard anywhere.”  – Peter Julian, NDP International Trade Critic