This month, we are pleased to present Hypothesis, a new 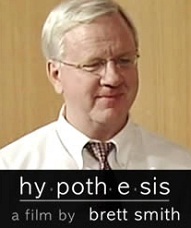 documentary film by Brett Smith on the life and struggles of physicist Professor Steven E. Jones during the years when his criticism of the official explanation for the destruction of the World Trade Center drew national attention to him and Brigham Young University. Please see below for a full synopsis.

Videos: Hypothesis, plus a mystery video or short films

Professor Jones had been teaching at Brigham Young University (BYU) for over twenty years, and he loved his students and his career. He was attending a lecture in 2005 when the subject of 9/11 came up. The lecturer hinted that something was deeply amiss in the official story and half the room agreed with her. Professor Jones fell into the other half of the room’s shocked surprise at the idea. Afterwards he did some research on the  internet, discovered Jim Hoffman’s WTC 7 site, and learned for the first time about World Trade Center Building 7 which, not struck by a plane, came down in the exact manner of a controlled demolition. His research into the destruction of the buildings began.

Professor Jones wrote his first paper on the subject, “Why Indeed Did the WTC Buildings Completely Collapse?”, and presented a seminar on the same topic at BYU, both of which drew the local press and created quite a stir.

The film contains some priceless exchanges and interviews with random students and the administration officials at BYU, which are enlightening, frightening, and humorous. Most impressive are the interviews with Dr. Jones’s scientific collaborator Dr. Jeffrey Farrer, as well as views of the lab and their experiments. There is an excellent clip documenting the circumstances of the gathering of the first dust sample that Dr. Jones and Dr. Farrer examined together.

The most dramatic, surprising, and damning interview, however, is with C. Martin Hinckley, the man who first threatened Jones and then tried to bribe him to stop his research on the evidence of explosives. In fact, his threats are later to materialize in the media attacks and the administrative leave that ended Professor Jones’s teaching career at BYU.

As we meet his wife, son, and grandchild in the film and we become aware of his gentle, friendly, and caring nature, it becomes clear that it hurt him deeply to be forced to stop teaching. When he speaks clearly about his “pursuit of truth,” we can see in him the spiritual resolve of Gandhi and Martin Luther King, Jr., both of whom practiced “satyagraha,” “satya” meaning “truth” and “agraha” meaning “pursuit of.” Satyagraha was the term created to describe the non-violent movement that Gandhi led, which also began on a September 11th, in 1906. Professor Jones may laugh when he is nervous or frightened, but he clearly has courage, born out of a great love for his family, his community, his country, and the world.

Although Professor Jones has been attacked in academia as well as by the media, it is clear that his research is logical, holds up under close scrutiny, and follows the scientific method. This documentary is a rare, honest gem of a film which provides an inspiring example of what Orwell meant when he wrote, “In a time of universal deceit, to tell the truth is a revolutionary act.”

The film is short, 48 minutes long, and ends symbolically with a view of the door closing as Professor Jones leaves his office at BYU to continue his 9/11 research on his own.

Following this film, we will watch a mystery video, or several short films, to be determined.

“Where ignorance is our master there is no possibility of real peace.”  Dalai Lama