At our monthly meeting this Friday, April 16, 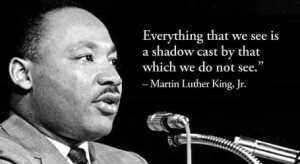 in memory of the assassination of Martin Luther King, Jr., 42 years ago this month, we will forego our usual 9/11 video fare and instead offer a special live multi-media presentation by Denver attorney Earl Staelin. As with the events of 9/11, the official story of the King assassination does not add up, and for those willing to look at the evidence, an entirely different picture emerges. Fortunately we are now the beneficiaries of decades of painstaking research into what actually transpired that day. What you don’t know about this event will surprise you.

“The King Assassination: Must History Be Revised?”

In January 1967, young photojournalist William Pepper published an article in Ramparts magazine on the devastating effect of the Vietnam War on civilians, featuring many photographs of their disfiguring and crippling injuries. The article deeply impressed King, who then met with Pepper and saw many more of Pepper’s war photos. The experience helped turn King solidly against the war, and he linked the war to the issue of poverty in America. On April 4, 1967, King delivered his powerful anti-Vietnam War speech, “Beyond Vietnam,” while also during that period organizing a movement called the Poor People’s Campaign. On April 4, 1968, King was assassinated. James Earl Ray, who had pled guilty to the murder but recanted his confession three days later, was ultimately convicted of the crime and received a 99-year prison sentence. However, in 1978 Rev. Ralph Abernathy asked Pepper, by then an attorney, to look into the possibility that James Earl Ray might be innocent. Pepper began an extensive investigation into King’s murder in which he eventually concluded that Ray was indeed innocent and discovered the true conspirators. In 1993 Pepper represented Ray in a televised mock trial for murder before a distinguished federal judge and against a successful Tennessee prosecutor. Ray participated from prison by closed circuit TV. The jury found Ray not guilty after a two-week trial. 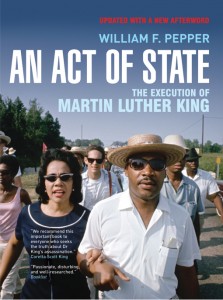 Most significantly, in 1999 Pepper tried a civil wrongful death case on behalf of the King family in which the jury, after three weeks and the testimony of some 70 witnesses, found Loyd Jowers, an admitted actual participant in the murder plot, liable for the murder, clearing Ray and finding that individuals in federal, state, and local government were also involved in the assassination. Pepper also proved that the New Orleans mafia played a central role. Pepper’s outstanding books on the trials, Orders to Kill (1995) and An Act of State (2003), as well as the trials themselves, received little media coverage. Why did Ray plead guilty? What forces killed King and why? How did they succeed? How did the coverup succeed? What role did the CIA campaign “Operation Mockingbird” play in the coverup and media suppression? Learn the answers to these questions and many more this Friday evening.

Earl Staelin is a Denver trial attorney with a longstanding interest in truth and transparency in government. Earl will present the story of Pepper’s investigation and the two trials through a visual presentation where you see the scene of the murder, actual witnesses, what they said, and the numerous forces involved in the murder and cover-up.

“A time comes when silence is betrayal …”