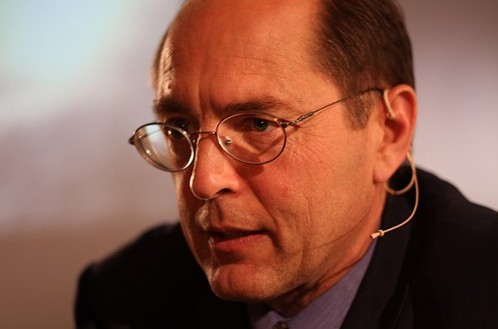 University of Colorado at Boulder

DENVER – For more information on Richard Gage’s KBDI TV 12 appearance, see the next article on this web page.

BOULDER – Internationally acclaimed 9/11 speaker and San Francisco Bay Area architect Richard Gage, AIA, will present the evidence of the destruction of the three World Trade Center high-rises at the University of Colorado at Boulder on Sunday, August 16, 2009, at 2pm in the Mathematics auditorium. Gage will give a live multimedia presentation on behalf of more than 750 architects and engineers questioning the official story of what happened to these buildings on 9/11/01. After careful examination of the forensic data omitted from the official account, these professionals are calling for a new independent investigation into these catastrophic events.

A practicing architect for more than 20 years, Richard Gage is the founder of Architects & Engineers for 9/11 Truth. The organization contends that the official FEMA and NIST reports provide insufficient and contradictory accounts of the towers’ destruction. AE911Truth points in particular to the destruction of the third high-rise, World Trade Center 7, a 47-story building which was not hit by an aircraft yet came down at free-fall acceleration in less than seven seconds. The group bases its conclusions solely on forensic evidence and does not engage in conspiracy theories or in assigning blame.

AE911Truth’s conclusions are shared by thousands of scientists, senior-level military, intelligence and government officials, pilots and aviation professionals, firefighters, scholars and university professors, 9/11 survivors and their family members, and other professionals around the world (patriotsquestion911.com, firefightersfor911truth.org, journalof911studies.com).

Gage will present an abundance of photographic, video, and forensic evidence showing that the way in which the World Trade Center Twin Towers and WTC Building #7 collapsed (straight down, symmetrically, at accelerating speeds) is inconsistent with the plane-impact-and-fire scenario that is the official narrative.  The collapses in fact exhibited all the characteristics of destruction by controlled demolition.

You’ll see eyewitness testimony from firemen about molten metal in the rubble pile, see video of molten metal flowing from the windows before collapse, and then learn that even jet-fuel-induced fire is not hot enough to produce molten metal.  Where did the molten metal come from then?  You will learn about how the chemical signature of the incendiary thermite has been found in the dust that blanketed lower Manhattan on 9/11.  Thermite does produce molten iron and it can slice through massive steel columns “like a hot knife through butter.”  Evidence of nanothermite, an ultramodern explosive, was found in abundance in the dust.  These are chemical fingerprints at the scene of the crime, yet the official government studies of the event have refused to even test for accelerants or explosives (which they are obliged to do, according to fire investigation standards).

Bring your skeptical friends who want solid, documented evidence and disciplined thinking. We need our best critical thinkers to examine this evidence. Richard Gage, AIA, has put his professional reputation on the line, and over 750 architecture and engineering professionals stand in solidarity with him at AE911truth.org.  The time has come to set politics and unfounded belief systems aside and for scientists to follow this evidence wherever it may lead.

The 9/11 Truth Movement, which Time magazine called “a mainstream political reality,” is gaining momentum. There are currently thousands of web pages calling the official 9/11 account into question. As AE911Truth’s own influence grows, Gage has embarked on over 100 speaking events, covering 19 states and 8 countries. The organization recently hosted exhibits at architectural conventions in San Francisco and Washington DC, educating thousands of architects and engineers, rapidly signing up about 100 onto the petition calling for a new investigation.

Gage will be speaking later this year in 11 cities in Australia, New Zealand, and Japan.

Parking at University of Colorado: There is a parking lot directly west of the Mathematics Building.  See Campus Map.  The Math building is a blue shape on the map, on the south side of Colorado Ave at Folsom Street.  Parking areas are shaded in pink on the map.  Add’l parking info
Notes from a few of the hundreds of Architects and Engineers…

“I think we were all shocked when the buildings came down; it just didn’t seem right. Richard Gage, AIA, does an excellent job uncovering the problems with the official explanation in a scientific, non-partisan way. It’s ‘An Inconvenient Truth’ about 9/11 that everyone should be aware of. Brace yourselves.”
-Chris Mungenast, AIA
Somerville, MA

“WTC Building #7 was not hit by aircraft, yet it collapsed nearly at free-fall speed – similar to the towers. The small fires don’t explain this, and the two reports (FEMA & NIST) don’t address this or the molten metal found in the basement by the demolition contractors.  Why not?  What happened there?  I have serious questions as a result of Mr. Gage’s thought-provoking presentation.”
-John Cole, Architect
Walnut Creek, CA

“The presentation by AE911Truth.org brings serious doubt to the official story. It is very difficult to understand how all 3 Trade Center buildings could have come down the way they did, solely as the result of the 2 airplane impacts and resulting fires.”
-Jeffrey G. Arnold, Architect
Orinda, CA.

“AE911Truth exposes that a localized failure in a steel-framed building like WTC 7 cannot cause a catastrophic collapse like a house of cards at free-fall speed without a simultaneous and patterned loss of several of its columns at key locations within the building.”
-Kamal Obeid, PE, Structural Engineer
Fremont, CA

“I completely support AE911Truth.org.   Besides the prima facie evidence which they present well, I think there is a hidden truth in the lack of changes demanded by insurance companies and building code agencies as preventative measures. If they don’t want to change policy or method as a result of the ‘collapses,’ then there is no truth to the official story.”
-Keith Burns, Architect
Warren Grove, New Jersey