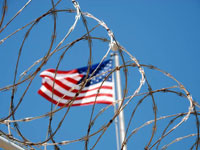 DAY.  Since 9/11 was the pretext for the shameful legacy of torture that our country now bears, we will deviate from our usual 9/11 truth films, and honor the crucial need for accountability for those responsible for authorizing these atrocities.

After 9/11/01, five lawyers for the Bush administration met behind closed doors, called themselves the “War Council,”  and crafted legal counsel to authorize torture by our military and intelligence agencies.

Shown on Bill Moyers Journal, Torturing Democracy is a film from award-winning producer Sherry Jones. It examines America’s detention and interrogation practices in the “war on terror,” and gives us an overview of this history: Who was rounded up by bounty hunters and others around the world? Who tried to stop this insanity? Who prevailed with this political policy creating the mess we now have? What did Congress do? What did the Supreme Court do? What happened to the detainees?

We will learn that the techniques used came from the SERE (Survival Evasion Resistance Escape)  military training program, which in turn came from North Korea, the Soviet Union’s Stalin, and the Spanish Inquisition.

If you cannot join us for the movie and discussion, you may watch this film online at http://www.torturingdemocracy.org/.

Note: Please be aware that we are a multi-partisan organization and do not consider torture a Republican value. Many from the Republican and Libertarian parties have been among the most vociferous in calling for a new investigation into 9/11 and consider the radical neo-conservatives  treasonous—as well as the Democrats who continue to cover-up and enable these policies.

9:00-9:30: Discussion: What did the film leave out? Since the trail of evidence for 9/11 leads in part to Rumsfeld and Cheney, why would they be so insistent on torturing  detainees? What action can we take on June 25th?